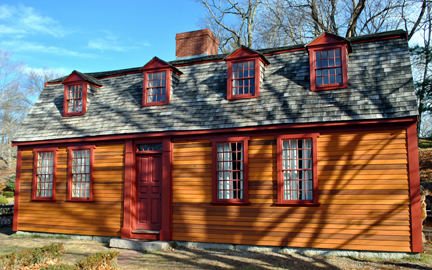 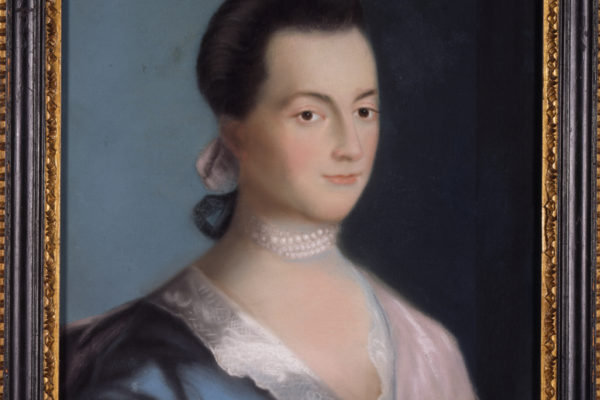 From the Massachusetts Historical Society. Not to be reproduced without permission.

We are pleased to welcome a new member site, the Abigail Adams Birthplace, to the Collaborative. The essay below — by Michelle Coughlin, author of One Colonial Women’s World(which is not about Adams, but rather Mehetabel Chandler Coit (1673–1758), the author of what may be the earliest surviving diary by an American woman) — describes the reopening, and perhaps the rebirth?, of this important women’s history site in Massachusetts.

Following the completion of a major two-year restoration project in which extensive structural damage was repaired, the Abigail Adams Birthplace in Weymouth, Massachusetts, is ready to welcome back the public. Visitors can expect not only a newly stabilized structure, but revitalized tours, a more period-appropriate collection of artifacts, and a host of new programming.

The extent of the disrepair that prompted the renovation first became apparent when, in 2011, past president and current board member Cathy Torrey tried to open a window and it literally came apart in her hands. In-depth architectural analysis and initial repairs subsequently revealed that severe termite damage had almost completely destroyed two of the main structural posts. The restoration work, which was funded by a $150,000 Community Preservation Act grant, was ultimately able to save the posts along with much of the original structure.

The two-story, six-room, circa 1685 saltbox was Adams’s home from the time of her birth in 1744 until 1764, when she married John Adams in the front parlor. In the years following her marriage, Adams frequently returned to visit her parents, who are buried in the historic North Weymouth Cemetery that borders the house. The Town of Weymouth recently used additional CPA funds to restore their gravestones.

Adams’s home remained in its original location until 1838, when it was moved to another site about a mile away. In 1947 the federal government purchased the land on which the Birthplace stood and decided to build veterans’ housing there. In order to prevent the demolition of the house, writer and activist Amy Hill Duncan formed the nonprofit Abigail Adams Historical Society and had the home relocated. The structure was sawn in half and moved via truck to its present location at the corner of North and Norton Streets, 500 yards from its original site. The historical society continues to operate the Birthplace today.

Since the Birthplace’s grand reopening last summer—which garnered national attention and attracted an almost overwhelming number of visitors—the historical society’s board of directors has focused on updating the museum’s interpretation, programming, and collections policies. Items in the home have been inventoried and conserved, a website has been developed, and programming serving a wide constituency—from local families to the academic community—is being planned. (Since heating and air conditioning systems were installed as part of the restoration process, tours and programs may now be offered year-round.) The Birthplace has also been strengthening its relationships with the Massachusetts Historical Society, which holds the massive collection of Adams family papers, and the National Park Service, which oversees the Adams family estate “Peacefield” in nearby Quincy as well as the John Adams and John Quincy Adams Birthplaces.

Among new programs being offered at the Birthplace are author talks, a session on the art and science of artifact conservation and restoration, a Women’s History Month panel focusing on Adams and her contemporaries Mercy Otis Warren and Judith Sargent Murray, a family soap-making day, a “Tea with Mrs. Adams,” and a program on slavery— although Adams herself opposed the institution, her father, Rev. William Smith, was a slave owner. The success of the society’s recent co-sponsorship with Weymouth’s South Shore Hospital of a program comparing eighteenth-century and modern treatments for breast cancer using Abigail and John’s daughter Abigail as a case study (she ultimately died from the disease at the age of 48 in 1813) has paved the way for future events addressing historic and modern medical approaches. And a slew of activities are being planned for the weekend of October 24 to mark the 250th anniversary of Abigail and John’s marriage. These will include a reenactment of the wedding to be co-sponsored with the National Park Service and held in the First Church in Weymouth, which celebrated its 390thanniversary in 2013; a scholarly symposium; and a fundraising dinner intended to build the endowment.

At the core of the mission of the Abigail Adams Historical Society is the goal of educating the public about Adams’s life and times. The Birthplace site is central to that mission. As Torrey points out, “This was the place that shaped Abigail Adams’s ideals and values.” Current president Judith Alukonis adds, “It’s more than just a building; it’s how we interpret Abigail and her world.”