By admin2 June 21, 2021 No Comments
June 4, 2021. On this day 102 years ago the United States Congress passed the 19th Amendment, sending it to the states to be ratified. Today we commemorated the pioneering role of Women’s Suffrage in Decatur, Alabama, site of the first Woman’s Suffrage club in Alabama, organized in 1892, by Mrs. Ellen Stephens Hilldreth. Susan B Anthony and Carrie Chapman Catt spoke here in 1895. 1922, Alabama, first woman to run for Congress was from Decatur, Mrs. Lelia Seaton Edmundson. 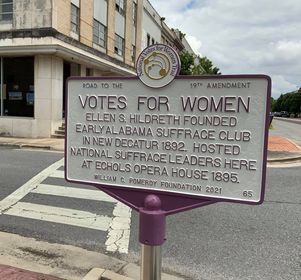 We also acknowledged the role of Women of Color and the Alabama Federation of Colored Women’s Club during the movement. Mrs. Minnie Brewster Cashin from Decatur was elected Vice President at the Second Annual Meeting. In 1929, Mrs. Othella Malone assisted in organizing the Annual State Meeting. We were honored to have descendants of Mrs. Hildreth present on this historic occasion. The March from the train station to the marker site was symbolic of the March 1913 parade and Equal Suffrage.