Many Voices: the Crane House, the Montclair YWCA, and telling the story of African American women’s history

We’re delighted to welcome this guest post from Claudia B. Ocello, Project Manager for the Montclair YWCA Project, on the inspiring work being undertaken at the Crane House in Montclair, New Jersey–a terrific look at how research and reinterpretation can extend a site’s reach, encompassing new histories and engaging new audiences. 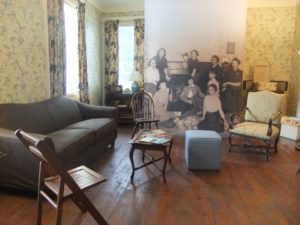 There’s a saying that it takes a thousand voices to tell a single story; but until recently there was only one voice being heard in the Crane House.  When the Montclair Historical Society opened the restored house in the 1960s, the restoration captured white, mostly male voices from the 1700s and 1800s heritage of the house, and very few – if any — female voices, an approach typical of historic preservation in the 1950s and1960s. The story of the Crane House left out voices of the women who worked, taught, socialized, and uplifted the lives and spirits of African American women and girls for 45 years, when the Crane House served as headquarters for the “Colored” YWCA in Montclair, NJ. With Board approval, plans to “tell” the story of the YWCA women moved forward in 2012, when I was brought on as the team’s Project Director.

The Crane House lies in a commuter suburb of New York City with excellent schools, historic homes with manicured lawns, a lively downtown, an art museum, and a reputation for being a mixed-race, progressive town for young urban professionals and their families. In the 1965, the Montclair Historical Society (MHS) saved the 1796 Crane house from demolition and ensured the legacy of one of the town’s founders, Israel Crane, endured.  MHS told an early American story and the house essentially became a decorative arts museum.  Israel Crane and his son James dominated the reinterpretation, with barely a mention sprinkled in by docents about wife Fanny and daughter-in-law Phebe.  And so the house and its interpretation stayed…for 40 years.

As with many small historic house museums around the country, in recent years MHS struggled to maintain attendance and relevance. To expand that relevance MHS realized they needed more “voices” to tell the story of the house and town, and to align them with larger state and national stories.  Digging through reports and primary sources we discovered anecdotes about and a bill of sale for Dine, an enslaved woman purchased by Israel Crane in 1806; found census evidence of Irish immigrants working for James and Phebe Crane in the mid-late 1800s; boarders living at the YWCA between 1930 and 1940; and through a community collecting project, found ten women to interview who worked for or attended programs at the YWCA.

Through the oral histories and archival research at the local public library we learned that the Montclair YWCA offered women and girls classes in dressmaking, millinery, photography, and dance; allowed them to take leadership roles in clubs such as the Business & Industry club and the Y-Teens; brought in prominent speakers and performers such as Countee Cullen, W.E. B. DuBois, Mary McLeod Bethune, and Langston Hughes; and provided a safe space to socialize, attend dances, and have receptions and parties. In the 1950s the YWCA “reverse-integrated” and allowed whites to become members, and became officially affiliated with the National YWCA.

Stories from the YWCA women included examples of Montclair’s de facto segregation – and further research turned up newspaper articles from Alabama, Pennsylvania, and Boston about Montclair’s racial divide.  Many white residents in the town however were not aware these racial issues ever existed. With the help of a filmmaker we told the story of the YWCA – and the story of Montclair’s de facto segregation placed in a national context– in a documentary, A Place to Become: Montclair through the Eyes of the Glenridge Avenue YWCA Women, 1920-1945.

We also changed the interpretation in the house to include more women’s voices and stories. We now show how the story of the Crane family, their domestic help, and the women of the YWCA fit into a state and national context.  Two of the four rooms on the first floor reflect the Crane family occupation.  We included anecdotes, passed down through family history, of an enslaved woman named Dine in a first floor period room where she may have served Fanny Crane tea. Copies of the census records showing Irish immigrant Catherine Conroy’s name and occupation help tell story in the dining room, where she might have been setting the table for dinner for James and Phebe. We include a diary of Annie Campbell, Phebe’s sister-in-law, which chronicles her anguish over the death of her young son; and discharge papers for Phebe’s Civil War soldier son James Beach Crane. Reproductions of excerpts from these primary sources passed around and discussed with visitors show a mother’s perspective on child-rearing in the 1800s.

The other two first floor rooms now tell the story of the women of the YWCA.  One room tells the story of the 1920s-30s boarders who, as part of the Great Migration, stayed at the YWCA while looking for work often in the large homes in Montclair.  The second room is now a 1940s/50s/60s “club” room where the Y-Teens and other YW groups met and socialized. New docent-led tours of the space include audio of the YWCA women speaking about what the YW meant to them and what life was like in Montclair during their time.  Rather than lecture, docents now encourage visitors to dialogue and reflect on segregation in their own time and own community based on these stories.

As docents lead tours, they discuss three strands of interpretation that are evident in the voices and stories in the house: What we know for sure (with historical documentation such as census records); what we can make educated guesses about based on that documentation (i.e. many Irish came over due to the Potato Famine, and the records show Catherine came through during that time, so we can guess why she immigrated); and what is family lore and legend (the Cranes liked Dine and treated her well, selling the ladies’ complexion soap she made in Israel Crane’s store and returning the money to her.)

Since all the voices telling the stories shared a common element – the historic house – we created an exhibition in the hallway articulating how local and national events merged, including a timeline of related events in Montclair, NJ and the US.  The Crane House reopened to the public this past October. Plans are now underway for a middle- and high-school curriculum using the documentary film to explore how these women’s lives and experiences parallel state and national stories; and new programming and collaborations with organizations promoting themes not unlike those of the YWCA – empowering women, eliminating racism, and open to many voices.