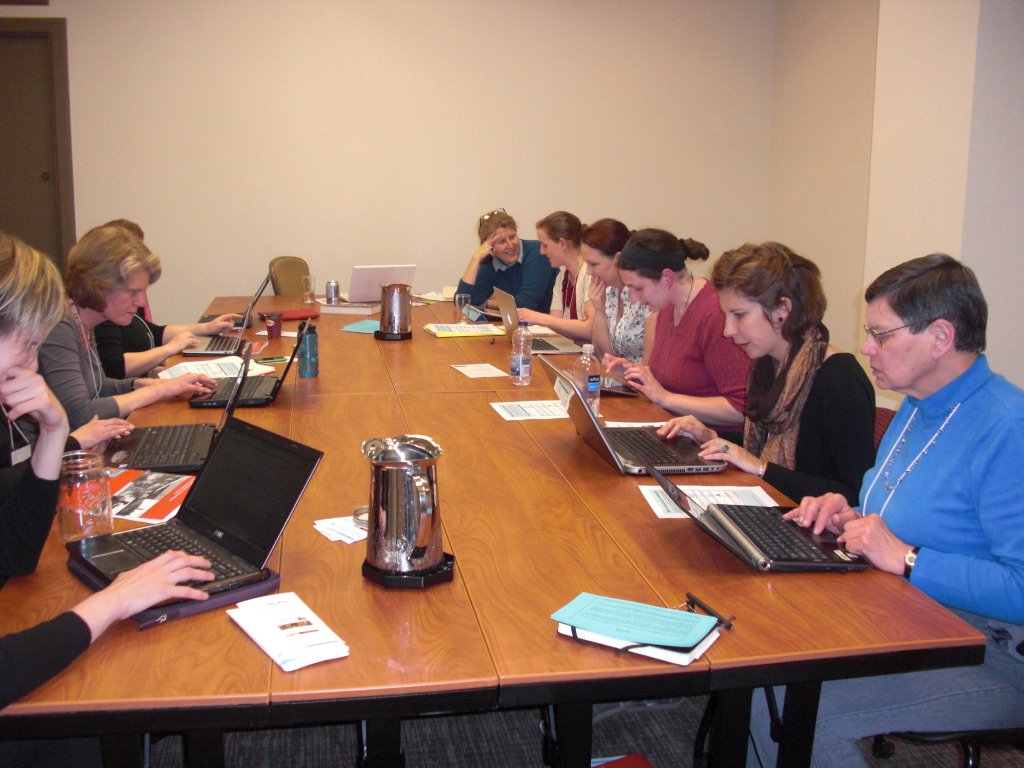 Spring 2013: The weak presence of women’s history on Wikipedia—a consequence in part of the small number of women (fewer than 15%) who edit Wikipedia—has long been a topic of conversation among those interested in promise and peril of this massive online encyclopedia, but there has been an uptick in discussion of this issue lately, as edit-a-thons and conference sessions aim both to explore and address this gap. In March 2013, the Albert M. Greenfield Digital Center for the History of Women’s Education at Bryn Mawr College hosted a conference, Women’s History in the Digital World, that included a talk on Wikipedia by Mia Ridge, (Department of History, Open University; editor of the forthcoming volume Crowdsourcing our Cultural Heritage); on March 15, 2013, the national event #TooFEW (Feminists Edit Wikipedia) encouraged users in groups or on their own to edit Wikipedia’s content; and on April 16th, a Women’s History Edit-a-thon occurred at the Schlesinger Library, Radcliffe Institute, Harvard University.

NCWHS board member and social media evangelist Marla Miller, attending the Bryn Mawr conference to talk about online initiatives in the study of clothing and dress, caught the bug, and soon plans were in the works for a toe-in-the-water event focused on the presence of site-based women’s history on Wikipedia. The April 2013 meeting of the National Council on Public History coming up in Ottawa, Canada, proved to be the perfect opportunity when NCPH Executive Director John Dichtl nicely made space available for anyone interested to gather together, learn more about the ways and places women’s history is both present and absent on Wikipedia, and make a start at editing. In preparation, the NCWHS proposed a Task Force within the WikiProject Women’s History. We also raised the subject at the dine-around NCWHS had already organized for Thursday evening of the conference, and announced it during the Friday morning session devoted to “lightening talks” on digital history projects.

Friday afternoon we were delighted to see every seat in the room (and then some) filled with women eager to learn and contribute. After some brief opening remarks and tutorials, we dove in. Participants registered as editors, created profiles and browsed websites; they taught each other how to navigate pages and make interventions, and shared news of successful edits. NCWHS board member Barb Howe added the WCTU building to an entry about early buildings in Morgantown, WV, added some sentences on nursing for the entry on “West Virginia During the Civil War,” and corrected the entry on Mount de Chantal Academy in Wheeling to reflect buildings now demolished; Jackie Antonovich (Nursing Clio) added Justina Ford, “Colorado’s first and only African-American Female Doctor from 1898-1952,” to a list of “pioneers” in women’s health (and flagged the need for a separate entry on this important figure); Debbie Doyle (American Historical Association) noted that the entry from Maymont, a historic house outside Richmond, omits the rich research Elizabeth O’Leary has done on domestic service in the house—a gap she plans to fill.

There is still much work to be done. We noticed, for instance, that there is no Wikipedia entry for the venerable Berkshire Conference of Women Historians, or the equally-important Coordinating Council for Women in History. The page describing Women’s History Sites in the National Park Service could be much improved. Many more examples were flagged during the 2-hour session, suggesting the important work that lies ahead for those willing to pitch in. Toward that end, we hope to continue this work, perhaps by way of workshops at future meetings of the NCPH, the AHA, and elsewhere. Meanwhile, help us keep the conversation going. Post edits you’ve made or think someone should make on our Facebook page; tweet about #ncwhswiki or message us @ncwhs.

Want to join in? Good places to start learning include Wikipedia: The Missing Manual; and The Beginner’s Guide to Wikipedia. There are also other, specific tutorials on how to edit a page, how to submit an article, and how to create citations. It’s not hard to do, and the payoff is meaningful. Give it a try.