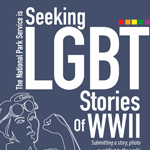 Near San Francisco, in Richmond, California, one of the industrial hubs of World War II has been preserved as Rosie the Riveter/World War II Home Front National Historical Park (www.nps.gov/rori). Once bustling 24/7 to build the ships crucial for fighting and winning World War II, the park now preserves and interprets the history of the war effort that supplied the equipment and supplies that made victory possible. This park focuses on the Home Front, the disrupted lives of women, their roles in producing industrial might (one company switched its manufacture from vacuum cleaners to gas masks) and its many effects from child care to pre-paid health plans that impact us today.  In addition to interpreting many historic sites throughout the city, including, the Ford Assembly Plant where jeeps were assembled and the SS Red Oak Victory, one of the 747 ships built in these shipyards, the park focuses on the women’s stories.

If you’re very lucky and go there today you’ll meet two amazing women, each truly living history. They lived through World War II and very much want to share their experiences with park visitors.  Park Ranger Betty Reid Soskin, an African American woman now 93, worked during World War II as a file clerk in the segregated Union hall, Boilermaker’s A-36. Today she presents her story several times a week. Flora Nimomiya, a Japanese American woman who often greets visitors, shares a quite different story. As a young girl, she and her family were forced to leave their cut flower business behind while they were imprisoned in a Japanese American internment camp. They returned after World War II to find their greenhouses full of broken glass windows, only to rebuild again as shown in their video “Blossoms and Thorns: A Community Uprooted” (available from the Rosie the Riveter Trust for $10.)

In addition to these women, Rosie the Riveter/World War II Home Front is now seeking to find LGBT people’s stories from that era. Many of these people are now in their 90s, making finding them and collecting their stories of the greatest urgency. Some of their stories can only be told now. The park recently launched a campaign to collect stories from lesbian, gay, bisexual and transgender World War II era civilians.

In March 2014, the park hosted an event in Walnut Creek, California, to celebrate the park’s LGBT outreach effort to find  anyone who could contribute information or artifacts from this era. The event that honored Bev Hickok, 95 years old, a former riveter/inspector at Douglas Aircraft from 1942 to 1943, as well as a “WAVE” (Women Accepted for Volunteer Emergency Service) from 1944 to 1946.  Ms. Hickok published a novel based upon her experiences, Against the Current, Coming Out in the 1940’s. As a “WAVE” with the U.S. Navy, she had to hide her lesbian identity since she would have been dishonorably discharged if she had been discovered.  Her publicist read excerpts from her book describing Hickok’s first day at the aircraft factory– “It was like stepping into an inferno, filled with the intermittent roar and thud of guns and the high-pitched shrieking of drills, sounding like maddened insects.” The keynote speaker was Therese Ambrosi Smith, author of Wax, a fictional account of two lesbian shipyard workers in the Richmond Kaiser WWII Shipyards.

Due to the prejudice and severe legal, economic and social consequences of revealing sexual orientation in the 1940s, much of this history has been forgotten or never documented.  The park’s museum collection now has very limited primary source information about LGBT civilians.  The National Park Service has set up a confidential phone line for LGBT stories to make it safer for people to contact us if they wish to remain anonymous. The LGBT confidential phone line is (510-232-5050 x6631). In 2015, the National Park Service and the Rosie the Riveter Trust will produce a traveling exhibit from the primary resources received from the collection effort.

Please help the NPS spread the word about this important project and help Rosie the Riveter find these LGBT women so that they and their stories will not be lost to history but become part of all our known history. Please see www.nps.gov/rori or call the confidential phone line.