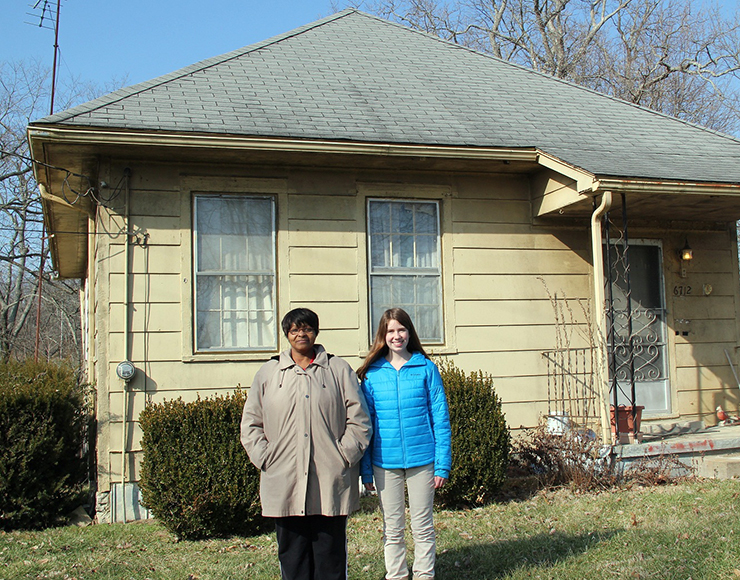 A fifteen-year-old high school student working toward her Girl Scout Gold Award presented her nomination of Buck Creek Rosenwald School for the National Register of Historic Places during a meeting today of the Kentucky Historic Preservation Review Board at Paul Sawyier Public Library, Frankfort.

Julia Bache, a sophomore at Kentucky Country Day School, is a direct descendant of Benjamin Franklin and said she became interested in history after attending a reunion in 2006 commemorating his 300th birthday.

“Ever since I was a Brownie I’ve been looking forward to earning my Gold Award, and now I’m actually working on my project,” she said. Julia first earned her Silver Award by creating a program whereby Girl Scouts could earn a patch for learning about the history of Locust Grove, a National Historic Landmark. She said her interest in Rosenwald Schools came about after she became aware of the Jefferson Jacob Rosenwald School in Prospect, which was listed in the National Register earlier this year.

The Rosenwald rural school building program was a major effort to improve the quality of public education for African Americans in the early 20th century. The initiative dates to 1912, when Sears president Julius Rosenwald gave Booker T. Washington permission to use some of the money he had donated to Tuskegee Institute to construct six small schools in rural Alabama. In 1917, Rosenwald set up the Julius Rosenwald Fund to help fund construction of similar schools throughout the South.

“At first, I thought the nomination process would be a straightforward history project, but I’ve also made some really nice connections and unexpected friendships with some of the former students, as well as with the owner of the school,” Julia said.

The father of the current owner attended the school, as did several of his sisters, whom Julia interviewed for her research.

For the second phase of the project, Julia will create a traveling exhibition to go to museums and historical societies around the state. She is planning to display her exhibition at the Kentucky Gateway Museum in Maysville, the Shelby County Historical Society, the Harrodsburg Historical Society and the Jeffersontown History Museum.

“Before I started this project I had no idea that Rosenwald Schools even existed,” she said. “Now I have the opportunity to tell others and want to make more people aware of these important places.”

The Kentucky Historic Preservation Review Board is charged with evaluating eligibility criteria for National Register nominations from Kentucky prior to their submission to the National Park Service (NPS), which administers the program in partnership with state historic preservation offices, including the Kentucky Heritage Council. Approved nominations are forwarded to the NPS, an agency of the U.S. Department of the Interior, for final determination of eligibility, with a decision required within 45 days of receipt.

The Girl Scout Gold Award represents the highest achievement in Girl Scouting and challenges young women to embark on a seven-step project to solve a community problem or perform a public service. This includes identifying an issue, investigating it thoroughly, getting help to build a team, creating a plan, presenting the plan and gathering feedback, taking action, and finally, educating and inspiring.

“I have to say, I am quite inspired by Julia’s work,” said Marty Perry, Heritage Council National Register coordinator. “Writing a nomination requires a great deal of research and writing expertise, not to mention the ability to present your nomination to the review board and address their questions. She is a very impressive young lady.”

(Julia Bache, a sophomore at Kentucky Country Day School, is shown at right, with the current owner of the Buck Creek School, Elaine Taylor. Taylor grew up in the former school house, when it was converted to a private home after the school closed in the late 1950s. Both of Taylor’s parents attended this Rosenwald school.)