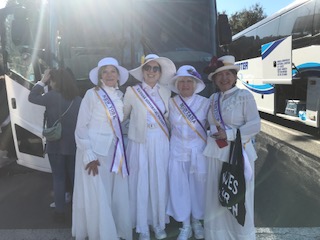 By Lauren HarrisJanuary 20, 2020 No Comments

Representing the suffragists of our country would be impossible for just 100 people. There are simply too many luminaries, not to mention the throngs of unrecognized women we are working to recognize on our National Votes for Women Trail (NVWT). Yet there we were in Pasadena — four NVWT State Coordinators — pinning on our banners to represent Kansas, Kentucky, Massachusetts, and New York for the “Pasadena Celebrates 2020” float in the Rose Parade on January first. 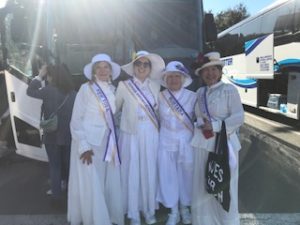 Joining the 100 out-walkers behind the 50-foot rose and iris covered float, complete with a eucalyptus leaf covered Statue of Liberty, we were humbled. We were looking forward to shining a light on the hard work of the women and men of previous generations who worked so selflessly to pass the nineteenth amendment to the United States Constitution, which granted many women the right to vote. The Stealth Bomber flew over, Alicia Keys’ “Girl on Fire” blasted from the speakers, and we headed out, left foot first. 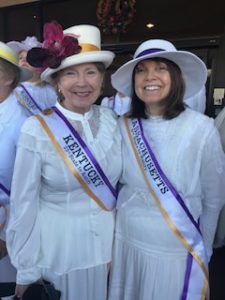 Marsha Weinstein and Fredie Kay in the 2020 Rose Parade

But as we marched the five- and one-half miles of the parade route, something very unexpected happened. The crowd didn’t seem to recognize us just as a symbol of history, they saw us as a symbol of hope. The middle-aged man who put his hand over his heart as we passed. The elderly woman nodding her head with tears in her eyes. The teenage boy with both fists pumping in the air. The young women standing and whooping. Our chants changed as we marched from, “Votes for Women!” to “Use your Vote!” and the crowd joined in. In honor of float rider civil rights icon, Dolores Huerta, we began, “Si se puede!” Spanish for “Yes we can!” Again, the crowd roared back. The energy never stopped, we were waving furiously and high-fiving hands even through the last block.

As the parade ended, we weren’t the same people we were when it started. Those spectator faces — every age, color and gender — nearly one million by most accounts, had empowered us. The suffragists we were honoring were proof that grassroots organizers can make a change. Those cheers reminded us that there is still work to be done, and we are the people who need to do it. People are hungry for the information we are collecting on our NVWT Trail and for the celebrations of Pomeroy Markers being installed. We are capturing history for the generations that will follow us. Let this year’s “Pasadena Celebrates 2020” float kick off a new decade of activism and collaboration, so we can genuinely earn the applause that we so generously received.