Hit enter to search or ESC to close
RICBlog

A “China Women’s Chance”?: The Coronavirus Pandemic, Violence, and Perseverance – By Alexis Karolin

By Andrea Malcomb November 30, 2021 No Comments

For my senior year at Ohio University, I am completing my Honors Tutorial College thesis on the increased reports of hate crimes against the Asian American and Pacific Islander (AAPI) community from 2020-2021 during the Covid-19 pandemic. The thesis argues that the increase in reported hate crimes is not simply a surge in anti-Asian sentiment but rather a reflection of the ongoing racism the AAPI community has faced in the last 150 years since their immigration to the U.S. 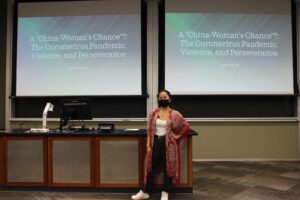 My interest in Asian American and Pacific Islander history stems from my personal background as a Chinese adoptee and my studies. Before my undergraduate experience, I did not have a strong racial consciousness or any particular feelings about what it meant to be an Asian American woman in the United States. However, courses and experiential learning opportunities at Ohio University and abroad have greatly influenced my personal and academic perspectives.

In the spring of 2020, I studied abroad at Swansea University in Wales, United Kingdom. While I was in Wales, I was constantly mistaken as an international student from Asia, regularly greeted in Mandarin, Cantonese, and Malay, and applauded for my stellar English-speaking abilities. Having lived in a predominantly white community growing up, I laughed at these occurrences of assumed identity and used the opportunities to initiate cross-cultural exchange about my home state of Ohio and my background as an Asian American.

When the Welsh government declared lockdown in Swansea, my best friend Vincent (from Hong Kong), and I decided to stay in Wales for the rest of the semester. We never experienced direct violence because of our race, but we were unprepared for the different treatment we received throughout the pandemic. Whenever we got on the public bus, white patrons pulled their masks tighter and moved to the back of the bus. I vividly remember one woman looking directly at me, lathering her face with hand sanitizer, and sprinting off the bus at the next stop.

These experiences increased my racial consciousness and created a growing passion to study the treatment of Asian Americans in white dominated society. In 2020, I began working with Dr. Roger Aden (Communication Studies) to research Japanese American internment. In the spring of 2021, I asked Dr. Katherine Jellison (History), to complete a tutorial (independent study) with me on Asian American women. We read a variety of works about Anna May Wong, Maxine Hong Kingston, Asian sex workers, Japanese domestics, Chinese garment workers, and Korean military brides. At the end of the semester, I asked Dr. Jellison to add readings about the increase in reported hate crimes against the AAPI community from 2020 to 2021. I think both of us were amazed by how timely our tutorial was.

In the summer of 2021, Dr. Jellison asked me if I would be interested in preparing a presentation for the National Collaborative for Women’s History Sites (NCWHS) to talk about the history of Asian American women and their experiences during the pandemic. At the time, I was sitting by the pool in Key West, Florida, attempting to relax. Despite my best efforts to avoid my email inbox, I responded to her within the hour with an ecstatic “Yes!”

By the fall of 2021, I completed the paper and PowerPoint presentation, and I decided that I wanted to expand the paper as my senior thesis. My thesis examines the increased reports of hate crimes through a lens of race and gender: specifically, I argue that the violence is a product of both white racism and sexism/paternalism. Asian American women experience an intersection of race- and sex-based violence because of long standing stereotypes of them as the exotic prostitute and the submissive doll. These stereotypes construct AAPI women as the ideal victim, making them more vulnerable to hate crimes than men, as reflected by recent reports in which women have reported almost twice as many incidents as men. Along with the increased reporting of hate crimes, there has also been a rise in reported cases of domestic abuse because of cultural stressors, economic insecurity, Asian men asserting patriarchal authority in a society that often feminizes them, and gender expectations from Asian and Anglo paternalism.

Despite the violence, Asian Americans and Pacific Islanders have transcended ethnic barriers in the #StopAAPI Movement to protest injustices and violence against their community. Similarly in the 1960s and 1970s, AAPIs inspired by the Civil Rights Movement, Black Power, Second Wave Feminism, and the Anti-Vietnam War Movement launched an Asian American Movement. My thesis specifically looks at the New Left Asian American Women’s Movement of the 1970s because it is not a true pan-Asian movement without the inclusion of all AAPIs regardless of their sex/gender. As a result of the #StopAAPIHate Movement, the Covid-19 Hate Crimes Act was passed in May 2021 to expand the powers of the Department of Justice to combat violence against the community. This legislation also generated controversy given the complicated relations between the Asian American and Black communities as well as the persecution of Blacks under the criminal justice system.

Most viral videos of hate crimes against AAPIs depict Black people as the primary perpetrators or inactive bystanders, even though over three quarters of offenders are white men. This reveals the complex history of racial tension and solidarity between the Black and Asian communities, in which the two are often pitted against each other by the white dominant society to draw attention away from issues of institutional racism. My research examines the origins of the “Model Minority” myth and its use against Blacks to paint them as lazy, uneducated, and poor, or as the “bad minority.” The “Model Minority” and “Black Criminality” myths demonstrate how white dominated society situates itself above the two communities of color and incites conflict to prevent the two from working together to dismantle systemically racist policies in the U.S. Additionally, with a lens of gender, I examine the construction of Asian American motherhood in contrast to Black motherhood and the role of the “Model Minority” myth in educational institutions. The research concludes with a call for racial solidarity against white racism and recommendations for anti-racist initiatives to create an accepting and multicultural environment in the U.S.

Originally, I was hesitant to study hate crimes against my community for my thesis because I feared that it would be emotionally taxing and difficult to complete. However, I have since found that working on this research has empowered me and given me a voice. It has also helped me better understand my own identification as an Asian American: to me, being an Asian American woman means carving out a space of existence beyond the binary “white America” or “perpetually foreign Chinese” and thriving despite the racism, sexism, and violence I experience in the U.S. The #StopAAPIMovement emphasizes the amplification of Asian voices and experiences. Through my research, I have had the opportunity to amplify the voices of Asian American women often excluded in historical scholarship. In the process, I have also strengthened my own voice.

On September 20, 2021, I presented my paper titled “A ‘China-Woman’s Chance’?: The Coronavirus Pandemic, Violence, and Perseverance” to the NCWHS’s Research and Interpretation Committee, and it was exhilarating. The virtual audience included my advisor Dr. Jellison, Dean Skinner from the Honors Tutorial College, Roxanne Male’-Brune from grant development, several members of the Athens Asian American Alliance, and members of the National Collaborative for Women’s History Sites. I was incredibly nervous at first because it has been a long time since I have spoken in front of an audience, but the members of the organization were encouraging and asked me great questions. Additionally, given their focus on public history, they provided unique perspectives that I had not considered beforehand. 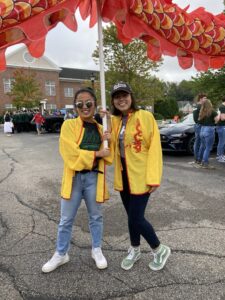 The members discussed how my research, which is widely rooted in academic discourse, can be expanded to become more accessible to a wider public audience. This feedback inspired me to develop a project proposal for my internship with the Mahn Archival Center in Ohio University’s Alden Library. In the spring of 2022, I will collect materials from the Asian American Pacific Islander Student Union, Athens Asian American Alliance, and Asian American Pacific Islander Lead (faculty organization) to document their founding and work in the community. These three organizations were founded in 2021 to create safe spaces of solidarity in response to the increase in reported hate crimes, and they are the first organizations of their kind to support AAPIs on Ohio University’s campus and in Athens. By creating a new collection, I will work with a variety of community members to document an important point in history for AAPIs in Athens. Moreover, the collection will be open to the public and future researchers.

I am incredibly grateful to have been given the opportunity to present my research to the National Collaborative for Women’s History Sites and for the feedback I received from the members of the organization. Their guidance has helped me become both a better historian and intersectional feminist.

Alexis Karolin resides in Athens, Ohio, where she is a fourth-year History Major in the Ohio University Honors Tutorial College with a Certificate in Asian Studies and a Certificate in Law, Justice, and Culture. Her coursework and research focus on women’s history, 20th century U.S. and East/Southeast Asian history, and the experiences of Asian Americans in the U.S. She has previously authored three journal articles on Japanese American World War II internment in partnership with Dr. Roger Aden of the Communication Studies department. This year, under the mentorship of Dr. Katherine Jellison (History department), Karolin is completing a senior research thesis, titled “A ‘China-Woman’s Chance’?: The Coronavirus Pandemic, Violence, and Perseverance,” which seeks to contextualize the increased reports of hate crimes against the Asian American and Pacific Islander community in 2020-2021 within the broader history of Asian American experiences in the U.S. over the  past 150 years.