Georgetown, Delaware, October 23, 2021 – At a ceremony dedicating a NVWT Pomeroy Marker in honor of suffrage leader Margaret White Houston (1864-1937), Representative Ruth Briggs King (R-District 37), whose serves Georgetown’s in the Delaware House of Representatives, presented a tribute to the Pomeroy Foundation and to the Georgetown Public Library, where the marker is installed. The tribute, signed by the Speaker of the Delaware House, acknowledges Margaret Houston’s civic activism and her crucial role in the state’s suffrage struggle. On behalf of the Library, Susanne Laws of the Library’s Board of Commissioners, and Rachel Jackson (Culver), the Library’s Director, accepted the tribute.

Also in attendance were several Houston descendants, led by Margaret Houston’s granddaughter-in-law, retired Judge Battle Robinson, Georgetown Mayor Bill West, and Town Manager, Eugene Dvornick, both of whom were instrumental in clearing the way for the marker’s installation. 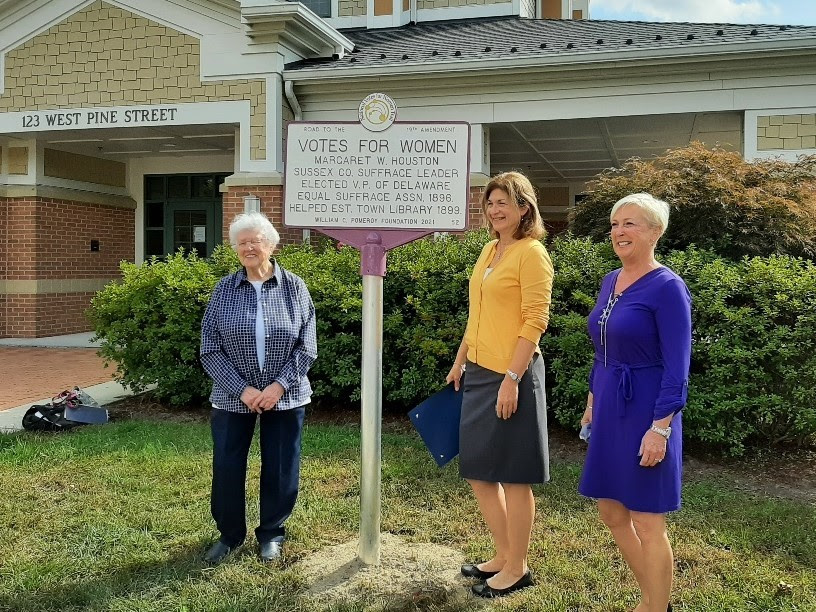 Several individuals spoke for organizations in which Houston was deeply involved during her years of suffrage activism. Kathleen Baker, vice-president of the Delaware League of Women Voters, of which Houston was a founder, paid tribute to Margaret Houston’s advocacy for voting rights and reminded the audience of continuing struggles in our own time. Rita Hollada, sixty-first President of the Delaware State Federation of Women’s Clubs, spoke of the historic role that women’s clubs had played in the establishment of public libraries, and recalled that Mrs. Houston had been the State Federation’s third president (1903-1905). It was as founder and first president of the Georgetown New Century Club (1898-1909) that Houston had led the effort to establish the town’s first library. And although the Georgetown New Century Club disbanded recently, ninety-one-year-old Ida Fawcett, the oldest surviving member, attended the dedication event as its representative. Marilyn Booker of the Sussex County Women’s Republican Club (Houston was the founding chairman) was also present.

The marker’s placement at the Georgetown Public Library, a spacious modern building that replaced earlier structures, recognizes Margaret Houston’s role in sparking the founding of the town library over a century ago. It honors her decades-long activism for women’s voting rights, beginning in 1897 when she testified before the Delaware constitutional convention, making the case for eliminating the word “male” in the new state constitution’s list of voter qualifications. The effort was unsuccessful. An early vice-president of the Delaware Equal Suffrage Association (founded in 1895), she regularly lobbied at the State House on behalf of amendments to the state constitution that would establish women’s right to vote. Between 1898 and 1902, she was a delegate to annual NAWSA conventions. When the 19th Amendment went to the states for ratification, she served as the Delaware Equal Suffrage Association’s ratification chair for her home county, Sussex County. Despite heroic suffragist efforts, the Delaware General Assembly did not ratify the amendment. After the amendment became part of the Constitution in 1920, she became the third vice-president of the new Delaware League of Women Voters. In 2020, she was inducted into the Hall of Fame of Delaware Women.

A reporter/photographer from the Cape Gazette captured the event for readers: https://www.capegazette.com/article/honoring-women%E2%80%99s-suffrage-trail-blazer/229426?amgee-source=dh