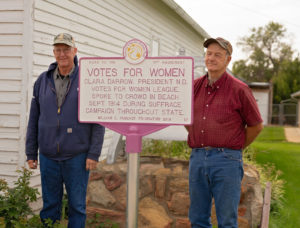 The Golden Valley Historical Society dedicated a new historic marker honoring early “Votes for Women” advocates on the grounds of the Golden Valley County Museum lawn in Beach, on Saturday, September 19. The new historic marker honors Clara Darrow, North Dakota Votes for Women League President, who visited Beach, in September 1914. At that time Beach had an active group of 52 suffragists. The Beach Votes for Women League, led by Mrs. Mary Hudson, hosted Darrow and National Association of Woman Suffrage President Dr. Anna Shaw during their visit to Beach. The women hoped to convince the men (only men could vote) that they should vote for full voting rights for women on the November 1914 ballot. 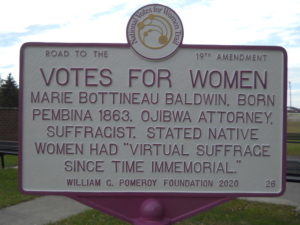 he National Votes for Women Trail Marker in Pembina, North Dakota is also now in place. It honors Marie Louise Bottineau Baldwin, a Native American Suffragist and Activist. The dedication for this marker will be held next spring. Now all five North Dakota National Votes for Women Trail markers are in place. This marker is on the grounds of the Pembina State Museum in Pembina, ND, which is near the Canadian border in the NE corner of the state.