After a welcome from Lucinda Ross, Executive Director of St. Michael’s Day Nursery and School, which now occupies the Garrett Settlement site, the audience heard remarks from Wilmington Mayor Mike Purzycki and Delaware Attorney General Kathleen Jennings, who connected the suffrage struggle with current efforts to secure voting rights for all eligible Americans. 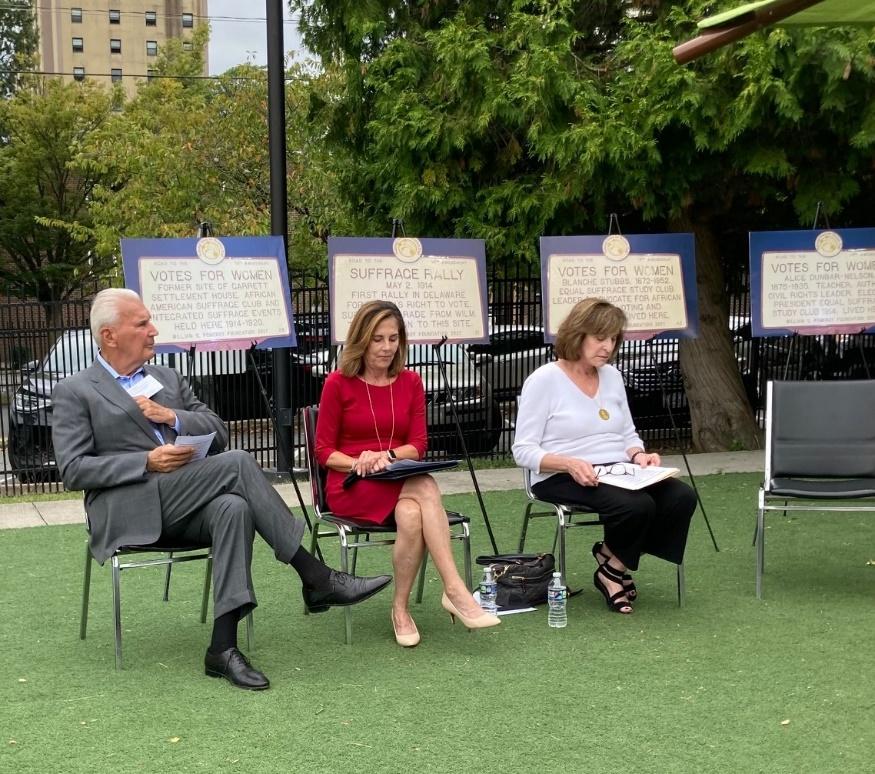 Lucy Beard, a member of the Board of Directors of the National Collaborative for Women’s History Sites (NCWHS), offered a congratulatory message from the Collaborative and detailed the NCWHS’s role in launching the National Votes for Women Trail and forging a partnership with the William G. Pomeroy Foundation. A letter from Deryn Pomeroy, a trustee of the Foundation, was read by Delaware Pomeroy Marker Committee member Marsha White. The other two committee members—Susan Del Pesco and Anne Boylan—described the process involved in securing Pomeroy suffrage markers, as well as the four markers and the connections among them.

In the audience were representatives of the Delaware League of Women Voters, the Delaware Historical Society, the Governor’s Office of Women’s Advancement and Advocacy, and the City of Wilmington Department of Planning, which facilitated the markers’ placement and installation. Three historical researchers—Carol A. Scott, Janet Lindenmuth, and Constance J. Cooper—who had worked on biographies of suffrage leaders, were also present. 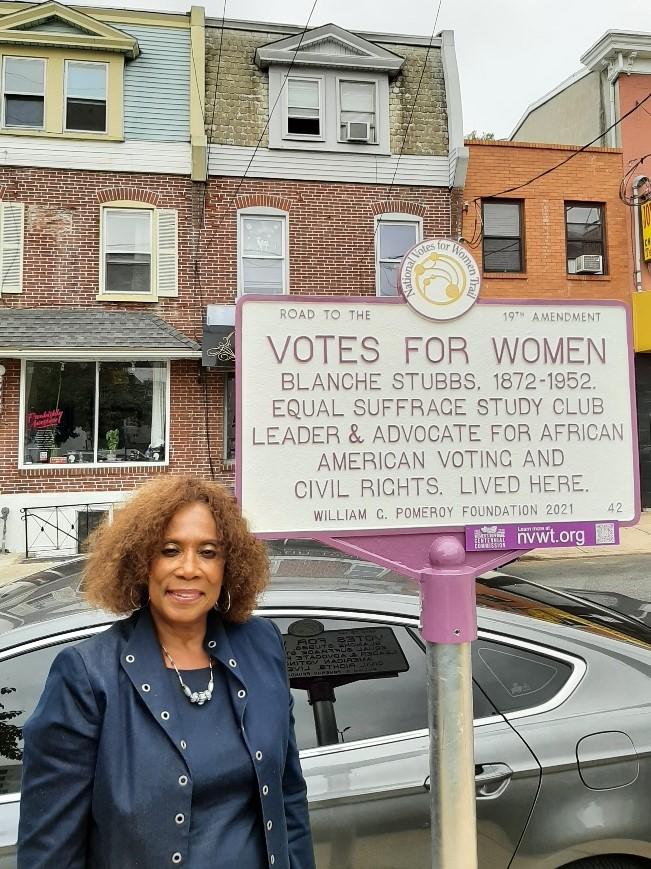 Photo by Anne M Boylan: Researcher Carol Scott at the historic marker for suffragist Blanche Williams Stubbs whose life and achievements Ms. Scott studied. The marker is located across from the Stubbs home, 827 North Tatnall Street, Wilmington, which is seen directly behind it.

Of particular interest to the attendees was the presence of suffragists’ descendants. Alita Collier, great-granddaughter of Fannie Hopkins Hamilton, a businesswoman who taught dressmaking classes at the Garrett Settlement House and was treasurer of the Equal Suffrage Study Club, travelled from her home in Maryland to be at the site for the event. 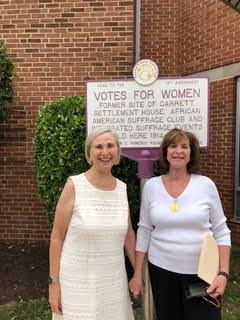 Three generations of members of Florence Bayard Hilles’s family were tickled to encounter a life-size cut-out of their militant suffragist relative. Hilles organized the first suffrage parade and rally in Wilmington on May 2, 1914. Afterwards, on occasion, she and members of the local National Woman’s Party branch met with Black suffragists at the Garrett Settlement House, an unusual occurrence in a segregated state. 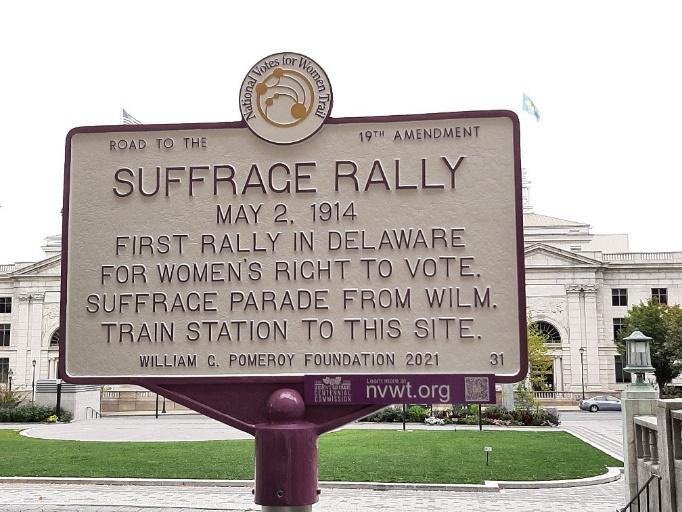 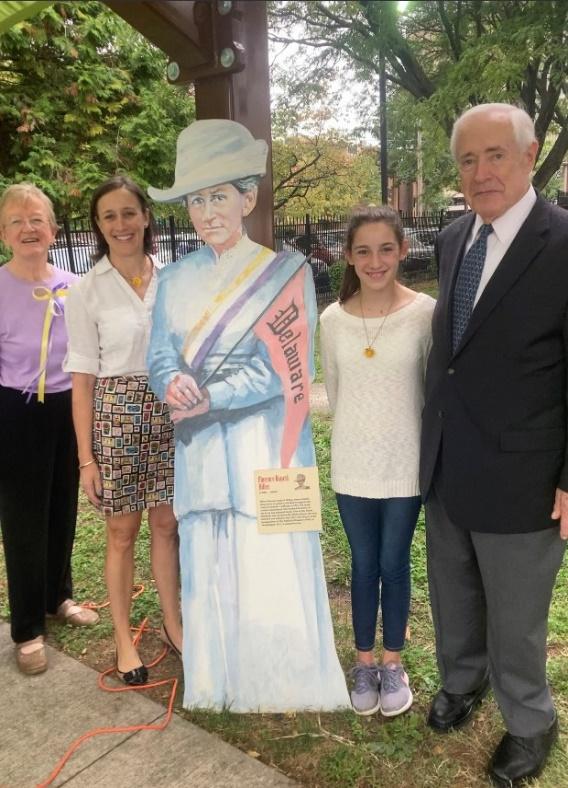 The connections among the four markers gave the dedication event a particularly meaningful flourish. The Wilmington Equal Suffrage Study Club met often at the Garrett Settlement House. Led by Blanche Stubbs, the club’s members marched in the 1914 Wilmington parade and attended the day’s rally. The club’s president, Alice Dunbar-Nelson, was Delaware’s most prominent Black suffragist and advocate for racial and gender justice. 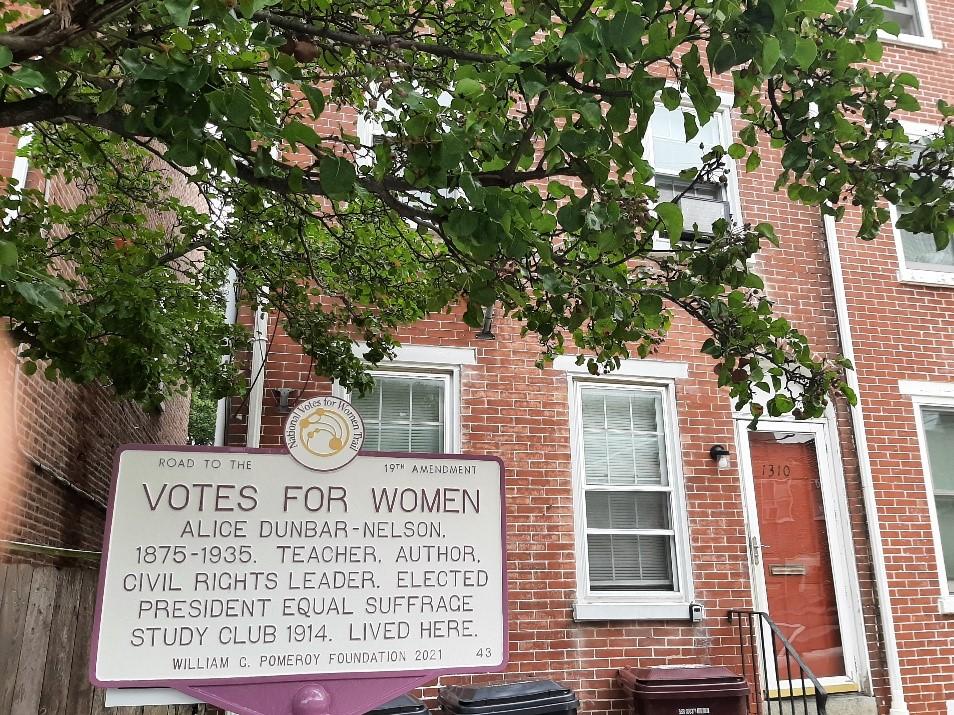